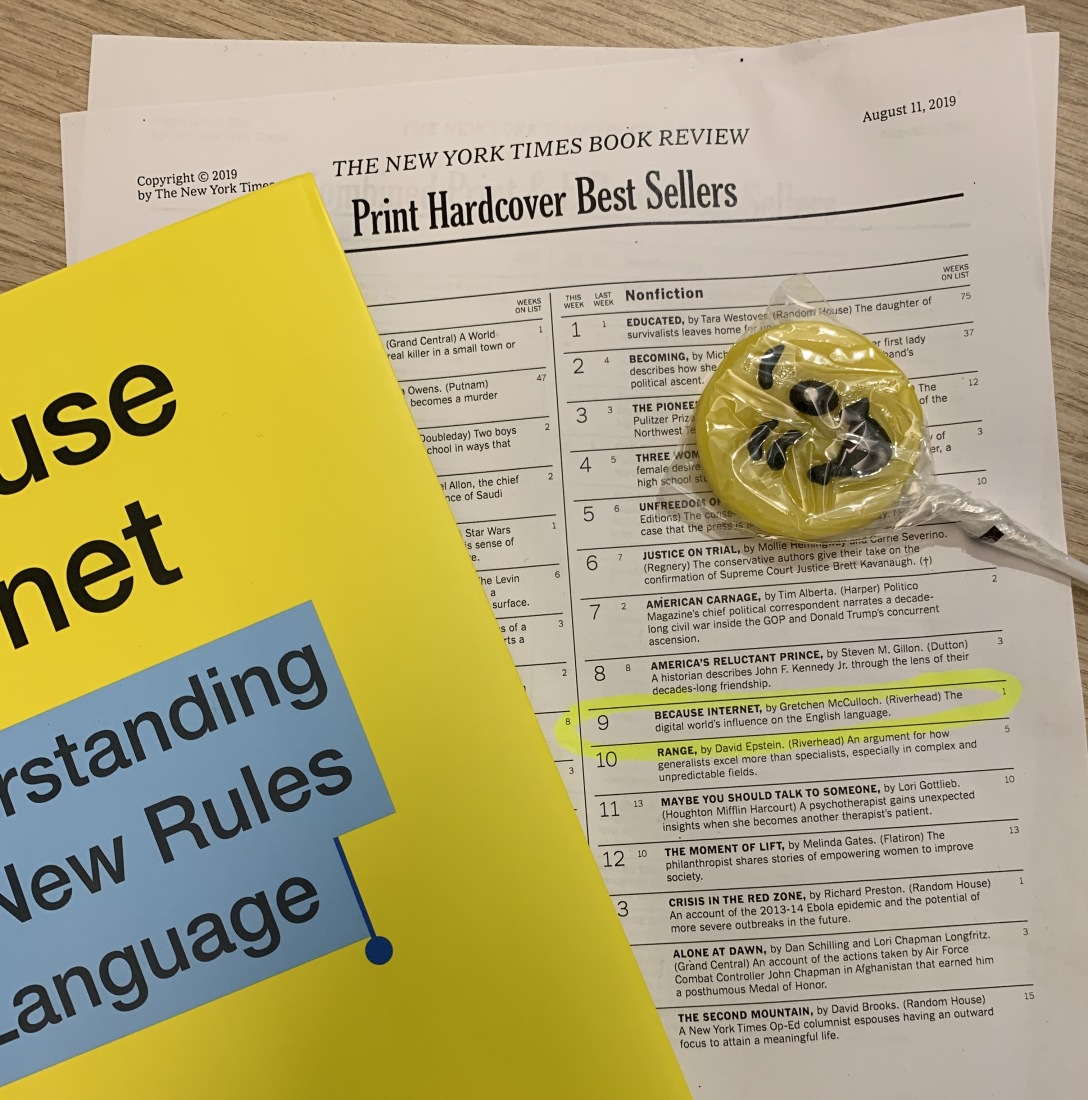 There was a New York Times Daily review of Because Internet (paper version!). Here’s one of the very nice things that reviewer Jennifer Szalai had to say about it:

McCulloch is such a disarming writer — lucid, friendly, unequivocally excited about her subject — that I began to marvel at the flexibility of the online language she describes, with its numerous shades of subtlety.

There was also SO MUCH other media about the book, including reviews in Time, the Economist, The New Yorker, and more; excerpts or interviews in Wired, Slate, Vox, Salon, Vice, and more; and interviews on NPR All Things Considered and Science Friday, Slate’s Lexicon Valley, Grammar Girl, The Allusionist and the Cracked Podcast, just to pick a few. (Full list with hyperlinks below.) A great little ad also ran next to the NYT crossword puzzle in the print edition (photo).

As if that weren’t enough, Because Internet also hit the New York Times bestseller list at #9 in its first week! Huge, huge thanks to everyone who preordered it and bought it during the first week which made this happen.

I did a book launch party in Montreal with Argo Bookshop at the Atwater Library! I was especially excited about the cake with the cover of my book on it which allowed me to literally eat my words and the internet-themed youtube playlist that twitter helped us put together to project on a screen during the party. Many thanks to all the people who attended!

Everything is also coming up Because Internet on Lingthusiasm! Our main episode was about the connections between gesture and emoji, aka the behind the scenes story of the part of the book where my podcast cohost Lauren Gawne makes a cameo! The bonus episode was about familects, not the book, but we also released a Special Offer on Patreon to get signed bookplate stickers. Our academic paper about emoji as digital gesture in the journal Language@Internet also came out this month, and Lauren wrote an accessible summary version of it for The Conversation which got picked up by Quartz. (We were very pleased to have to disclose that our Lingthusiasm patrons helped fund this research.) Also, I now have an Erdős number.

When people ask what it’s like to have this book I’ve been working on for five years finally come out, the best analogy that I can think of is that it’s like having it constantly be my birthday for the past several weeks: I’ve been hearing from so many people from all corners of my life who are excited to have spotted BECAUSE INTERNET in their local bookstore or library, or to have heard me on the radio or their favourite podcast. I haven’t always been able to reply to everyone individually, but I truly appreciate how many communities have claimed this book’s success as their own.

In non-book-related news, I also went to California to do a linguistics outreach event at the LSA Summer Institute in UC Davis, consisting of a lingwiki Wikipedia editathon focussing on articles about underrepresented languages in the afternoon, and in the evening doing a talk about effective communication of linguistics to a general audience and MCing the 3 Minute Thesis event. (A thread from an interesting talk I attended on language tech.)

Here is the truly staggering media list just for July alone for Because Internet, all 65 (!) items:

This month’s photo is real paper proof that Because Internet made the New York Times Bestseller list! 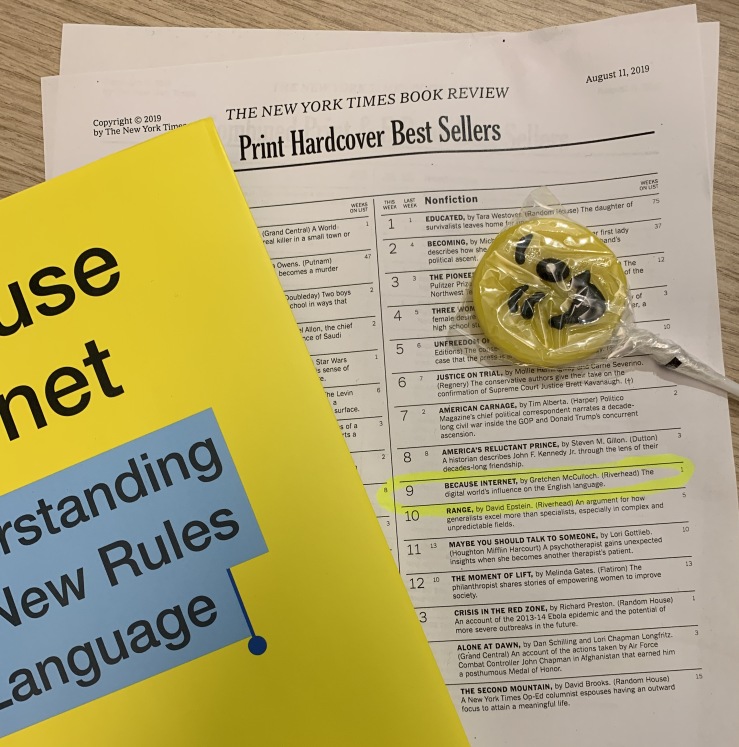 The preorder link for my book went up this month! You can now preorder Because Internet as a delightful surprise for your future self and to let the publisher know that people are interested in internet linguistics, either online by following the links here or by contacting your local indie bookstore. (Want a hint of what’s inside? Today in Things I Tell My Copyeditor: “stet, this is a Unicode joke”)

The Lingthusiasm main episode was about words for family relationships, or kinship terms, and the bonus episode was a behind the scenes Q&A episode where we answered your questions about the shape of the ear, very old words, and more. (The Q&A is also available as a special video episode for patrons!)

I finished my trip to Australia with a visit to Adelaide for the annual meeting of the Australian Linguistic Society, where I did a workshop on linguistics communication (#lingcomm).

I then ended the year in Spain!

This month’s photo is from Adelaide, where a group of linguists naturally chose to have dinner at the restaurant with the most, er, phonetic name. 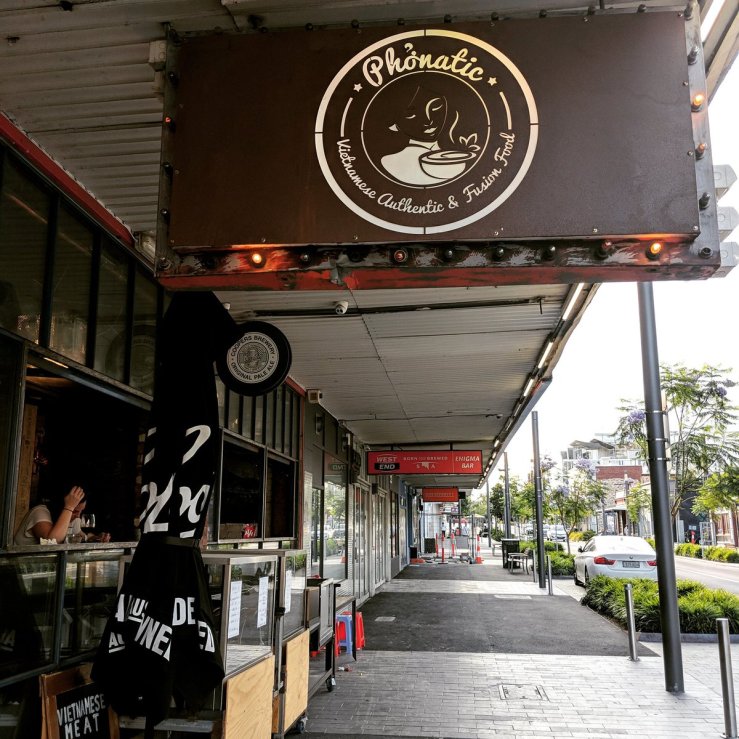 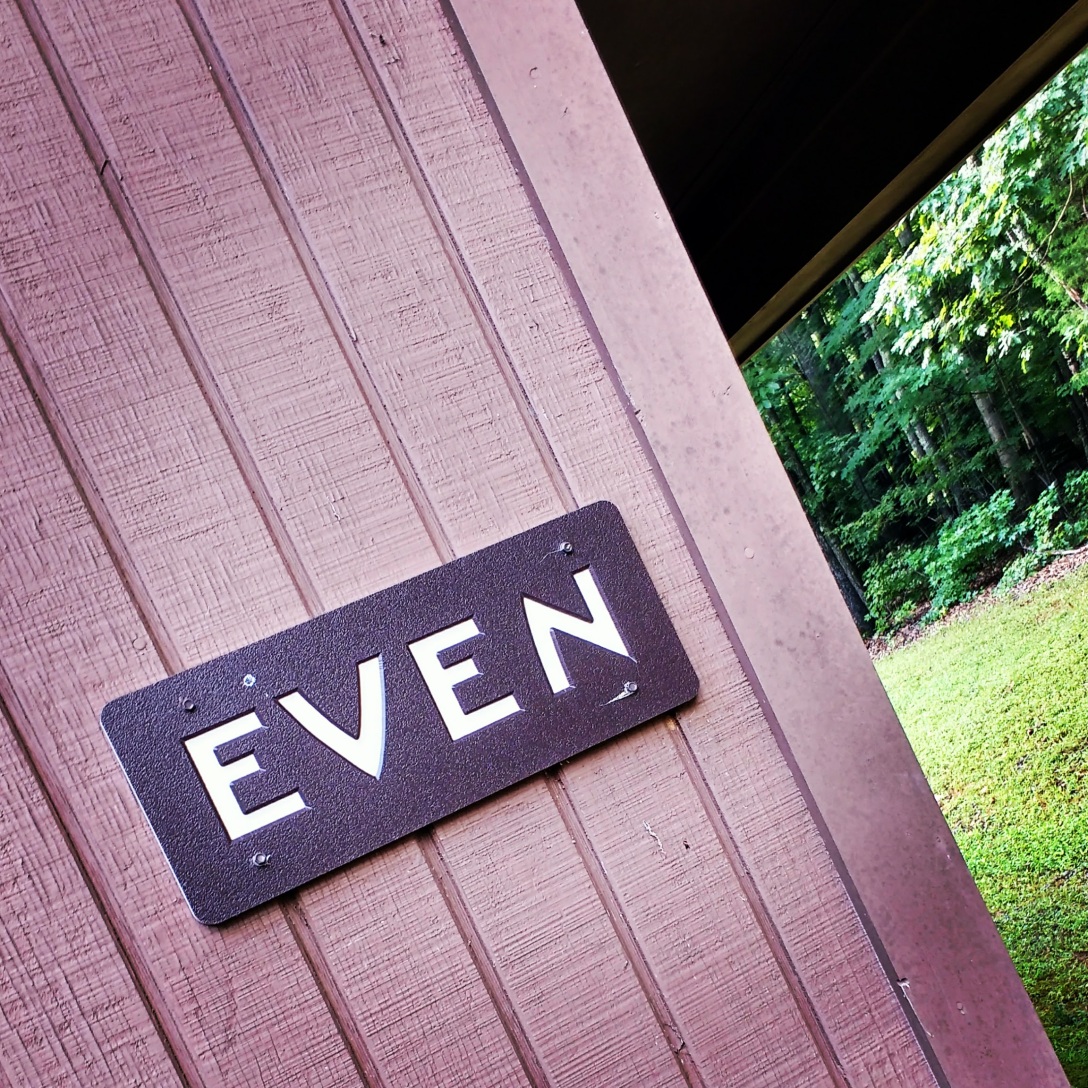 I went from Lingstitute to Washington DC, where I did some internet linguistic consulting work, and met up with some DC linguists, including Ann Friedman and several members of the Planet Word Advisory Board, which I am now on as well! I’m excited to be getting involved with this project to create a linguistics museum.

I then went to SpaceWitchCon, in the woods of North Carolina, where I ran a very fun session about internet linguistics (and also did a lot of singalongs and crafting and other excellent nerdery).

Later in the month, I was on live TV with Al Jazeera’s The Stream, talking about emoji (watch here), and a post of mine, about how to talk with your academic heroes and other people you admire, was featured on Thesis Whisperer.

This month’s photo is a sign from SpaceWitch: the rooms were divided into even and odd sections, so I took this picture for those times when you can’t even anymore: here’s some even!

I launched a podcast called Lingthusiasm with the fantastic Lauren Gawne of the linguistics blog Superlinguo. It’s a podcast that’s enthusiastic about linguistics and you can listen to it on iTunes, Soundcloud, Google Play Music, YouTube or most other podcast apps via rss, and follow us on Facebook, Twitter, or Tumblr for updates. We launched it with the first three episodes:

I consulted on this video for the PBS Idea Channel about the “words for snow” myth and I was quoted in this article for the New York Times: On the internet, to be “Mom” is to be Queen.

I also wrote book things! Nothing to announce yet, but here’s a few #amwriting protips.

I posted my yearly summary for 2016 on All Things Linguistic.

In January, I’m heading to the annual conference of the Linguistic Society of America, where I’ll be doing a panel and a talk and an editathon and lots of other things!

This month’s bookshelfie is the linguistics section of Foyles in London, a photo I took when I was in the UK in May. 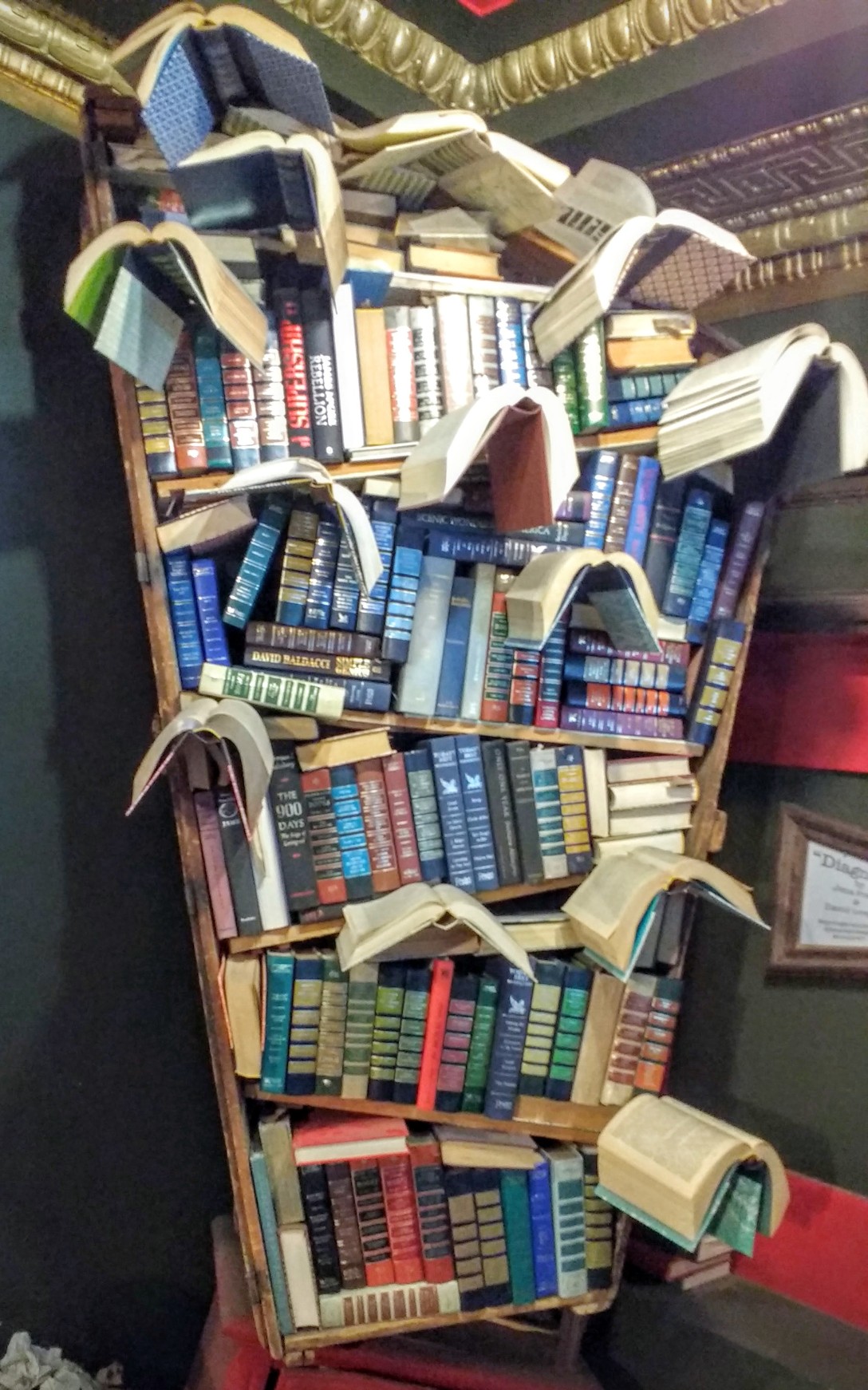 I took a trip to California! I gave a keynote address at the 25th annual CSU Fullerton Linguistic Symposium (my slides at bit.ly/explainling-fullerton). A few days later, I went into the offices of Dictionary.com and gave a talk in conversation with Jane Solomon. You can hear an audio excerpt here, where I talk about the idea of an “internet era” of English. (If you want to see some non-linguistic updates  from California, mostly food pics, you can check out my instagram.)

I hit a book milestone: 100k words of a (very rough) draft. You can see a celebratory screencap and read a few thoughts about the writing process. I also made an email mailing list specifically for very occasional book updates, so if you want to make sure you don’t miss any important internet language book news on social media, you can sign up for that here.

I collaborated on an episode of PBS Idea Channel about emoji with Mike Rugnetta:

I was also on NPR with a live interview on Science Friday, talking about the recent study finding that many emoji get misinterpreted, especially 😁, with the study’s lead author Hannah Miller. You can listen to the interview on souncloud.

me: posts about IPA
me: pity there aren't any consonant or vowel emoji

me to self, sternly: those are called letters

Photos are from the Last Bookstore in LA, which has an ordinary-looking linguistics section but and then some gorgeous book art. 😍😍😍 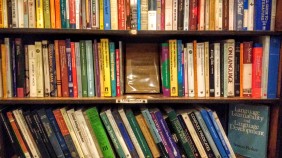 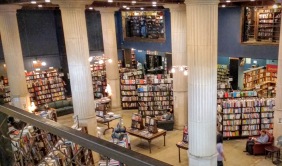 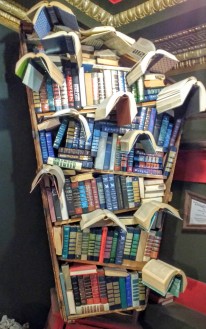 Agenda for May: Scotland!