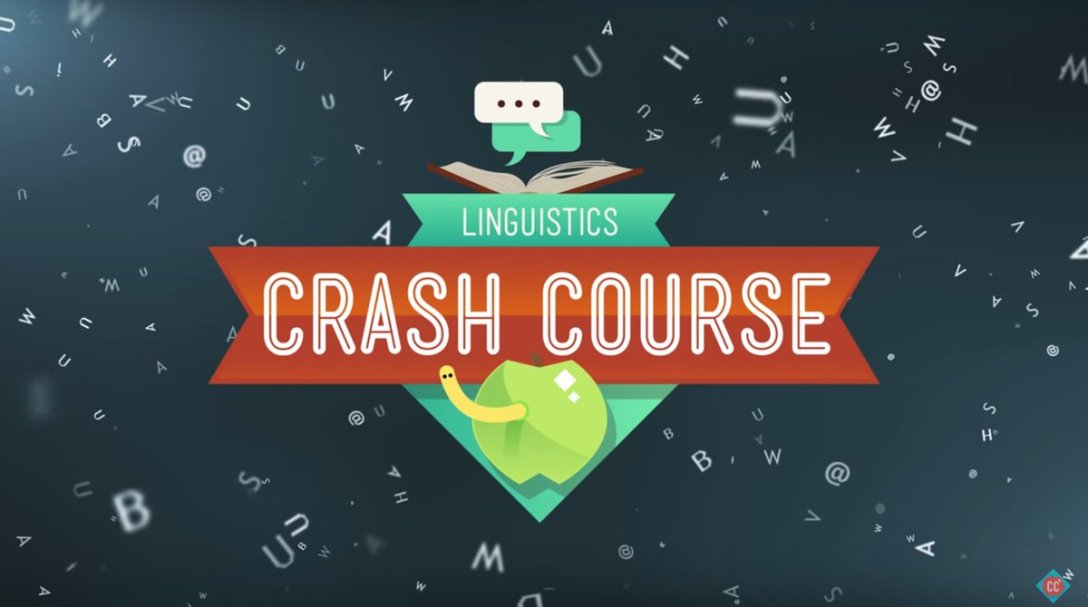 I wrote a very deep-dive article about the growing pains of the new emoji approval process at Unicode for Wired, featuring a graph that I’m very proud of: New emoji are so boring — but they don’t have to be.

If you’ve been unenthused about the emoji of recent years, you’re not alone. A flashlight? A toolbox? A fire extinguisher? A tin can? Who even uses these?

The emoji set to appear on your phone next year are similarly dismal. A screwdriver, a toothbrush, a bell pepper—seriously, what is this, a shopping center? When you think of emoji, you don’t think of a laundry list of random objects. You think of iconic, sometimes weird, expressive faces, like the face with tears of joy, the thinking face, the angry devil, the smiling pile of poo, and the see-no-evil monkey, plus classic symbols like the thumbs-up and the heart. But the latest batch includes just three new faces and one new hand shape, compared with 49 new objects, from a roller skate and a rock to a plunger.

The reason for this slide into irrelevance? The Unicode Consortium—the organization in charge of determining which symbols our devices are supposed to recognize—has increasingly been measuring the wrong thing in the process of approving new emoji.

I also wrote a very short piece for New York Magazine’s Futures issue (print) about memes and cultural references: In the future, we will have meme folklorists.

I now have a speaking reel online! If you’ve ever wondered what it’s like when I’m giving a talk about internet linguistics, you can now watch a short demo video, also embedded below. To book me to talk at your conference or company, please see the instructions on my contact page.

I’m very excited to announce that there’s going to be a Crash Course Linguistics minicourse on youtube in 2020! I’m even more excited to say that I’m involved, along with the excellent linguists Lauren Gawne and Jessi Grieser. 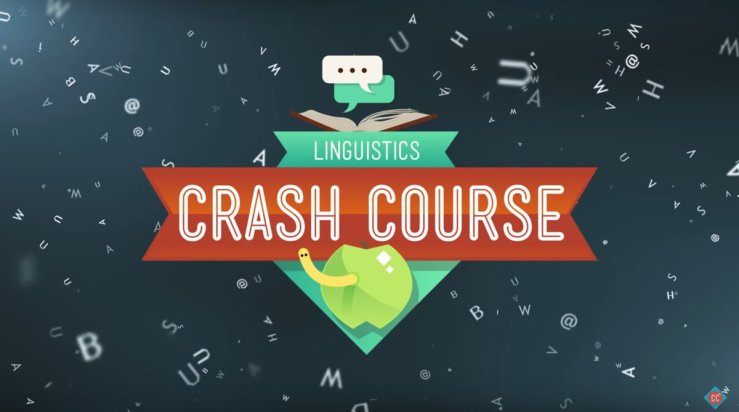 I guess we’re heading towards the end of the year, because the “top books of 2019” lists have started to appear, and Because Internet is on some of them!

Because Internet also made it to the semifinals of the Goodreads Choice Awards despite not having been in the previous round, because apparently enough people wrote it in! I’m stunned and honoured.

Other notable media included being interviewed on the Ezra Klein Show and having a review go up in Ars Technica. (Full list of all media this month below.)

It was our three-year anniversary for Lingthusiasm! A thread of which lingthusiasm episode you might want to start with, and a few choice quotes that people liked: evidentials in Tibetan languages, the French circumflex, and language is an open source project.

The main episode of Lingthusiasm was about the many ways of talking about many things: plurals, duals, and more and the bonus episode was about reading fiction like a linguist and our favourite lingfic book recs. We’ve also been very much enjoying seeing all of the Lingthusiasm merch that people are getting this month, especially the new lingthusiastic socks and BIG GRAMMAR tshirts, and the perennially popular baby onesies.

I love hearing about all your Because Internet gifting plans! (So far, popular giftees include parents and teenagers!)

If you want to get signed/personalized copies of Because Internet, you can order those through Argo Bookshop in Montreal and I’m happy to personalize them to whatever name you like, just indicate it in the “notes” field on checkout! (Signing is free, but shipping is at your own expense.) Argo recommends ordering by December 10 if you want the book to arrive internationally by December 25, if you’re within Canada you can order as late as Dec 12. You can also, of course, get regular non-signed copies of Because Internet everywhere books are sold.

This month’s featured image is already above, an advance glimpse of the graphics from the planned Linguistics Crash Course!

To get this monthly newsletter in your email, sign up at gretchenmcc.substack.com. 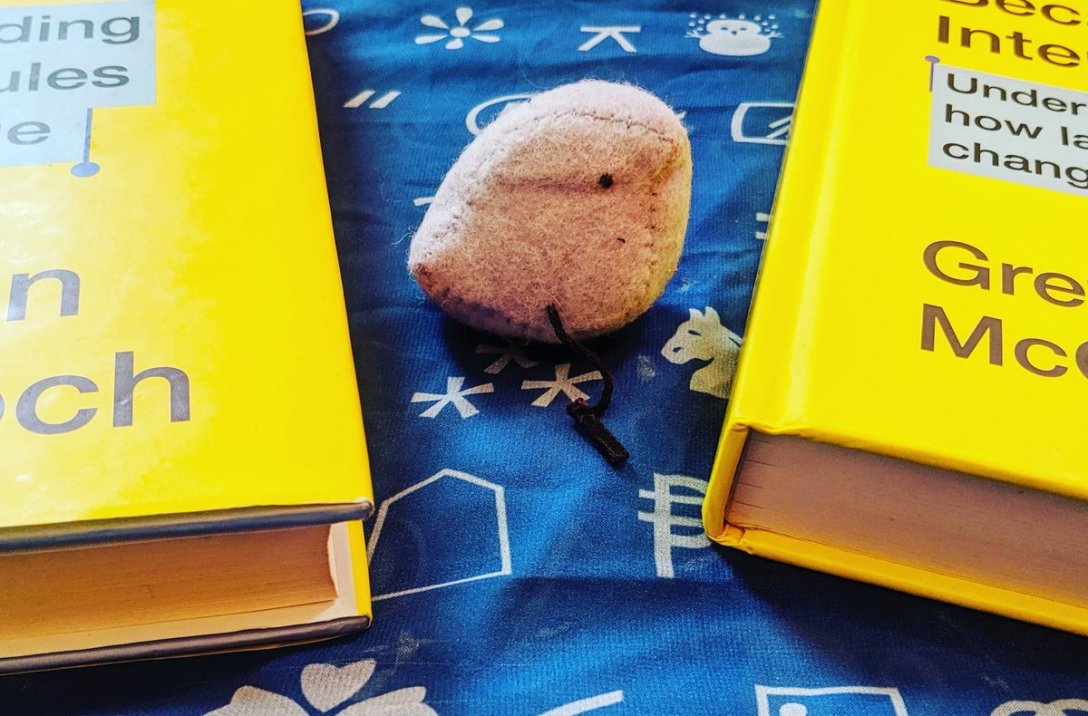 The UK edition of Because Internet came out this month! It will also be replacing the US edition in Australia, New Zealand, and other places that typically get UK versions of books. In celebration, I re-recorded a tiny portion of the Because Internet audiobook in a very posh, very fake British accent. You can get the real audiobook, featuring my normal voice, as well as all other versions of Because Internet here (or scroll to the bottom for a comparative photo of the US and UK editions!).

There was also some UK media around the UK publication! I did interviews in The Times (yes, that Times, the Times of London), the Observer/Guardian, BBC Science Focus, the Financial Times. Here’s a quote from my interview in the Guardian:

Like many linguists, I have a difficult time turning the linguistics part of my brain off. If you get me at the pub, I may be trying to listen to what you’re saying and then get distracted by your vowels. So to be interested in the way people talk on the internet is just a natural extension of being interested in how people talk around me on an everyday basis. […]

I think it’s easy to see people doing something different from you, and assume it must be haphazard, random, or they must not know “the right way” to do it. In reality, people are acting for deliberate reasons, and I’m figuring out what those reasons are.

I was on panels at two conferences this month! I did threads about adding linguistics programming to not-explicitly-linguistic conferences and about how making public-facing work leads to interesting opportunities.

Sound Education is a conference about educational podcasts in Boston, and I was on a panel about busting language myths through podcasting.

Scintillation is a small speculative fiction convention in Montreal, which I participated in for the second year now, and I was on panels about Using Language for Worldbuilding (moderator) and “What did we say before we said Cool?”

The main episode of Lingthusiasm was about smell words, both real and invented, and the bonus episode was about surnames. We were also recommended by Buzzfeed (!!), which called Lingthusiasm “joyously nerdy”.

Lingthusiasm also released new merch, including socks with our International Phonetic Alphabet, tree diagram, and esoteric symbols prints; greeting cards that say “thanks” or “congrats” on them in IPA; the pun-tastic “glottal bottle” and liquids for your liquids bottle/mug; and shirts/mugs/bags that say Linguistic “Correctness” is just a lie from Big Grammar to Sell More Grammars. (See photos of the all the Lingthusiasm merch here.)

I got inspired by the “ok boomer” shirts that have been going around to make “ok pedant” shirts (and people have actually bought them!)

Finally, but perhaps most excitingly, someone dressed up as my book for Halloween! I am ded.

This month’s photo is of the new UK edition of Because Internet (left) hanging out with the US edition (right) and a small stuffed wug. 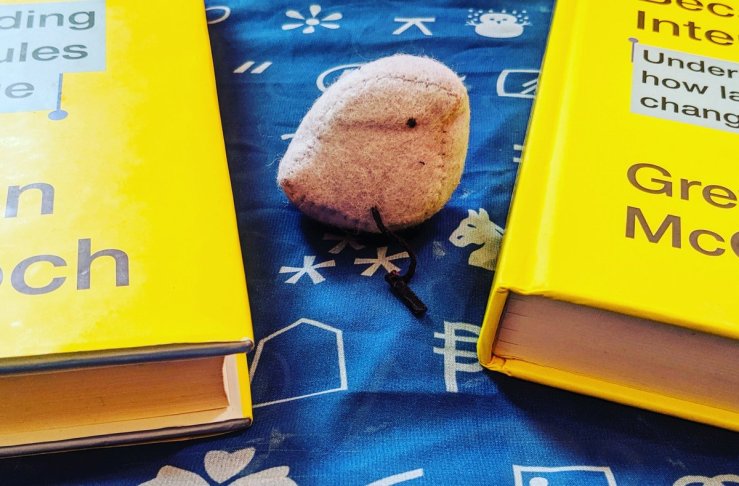 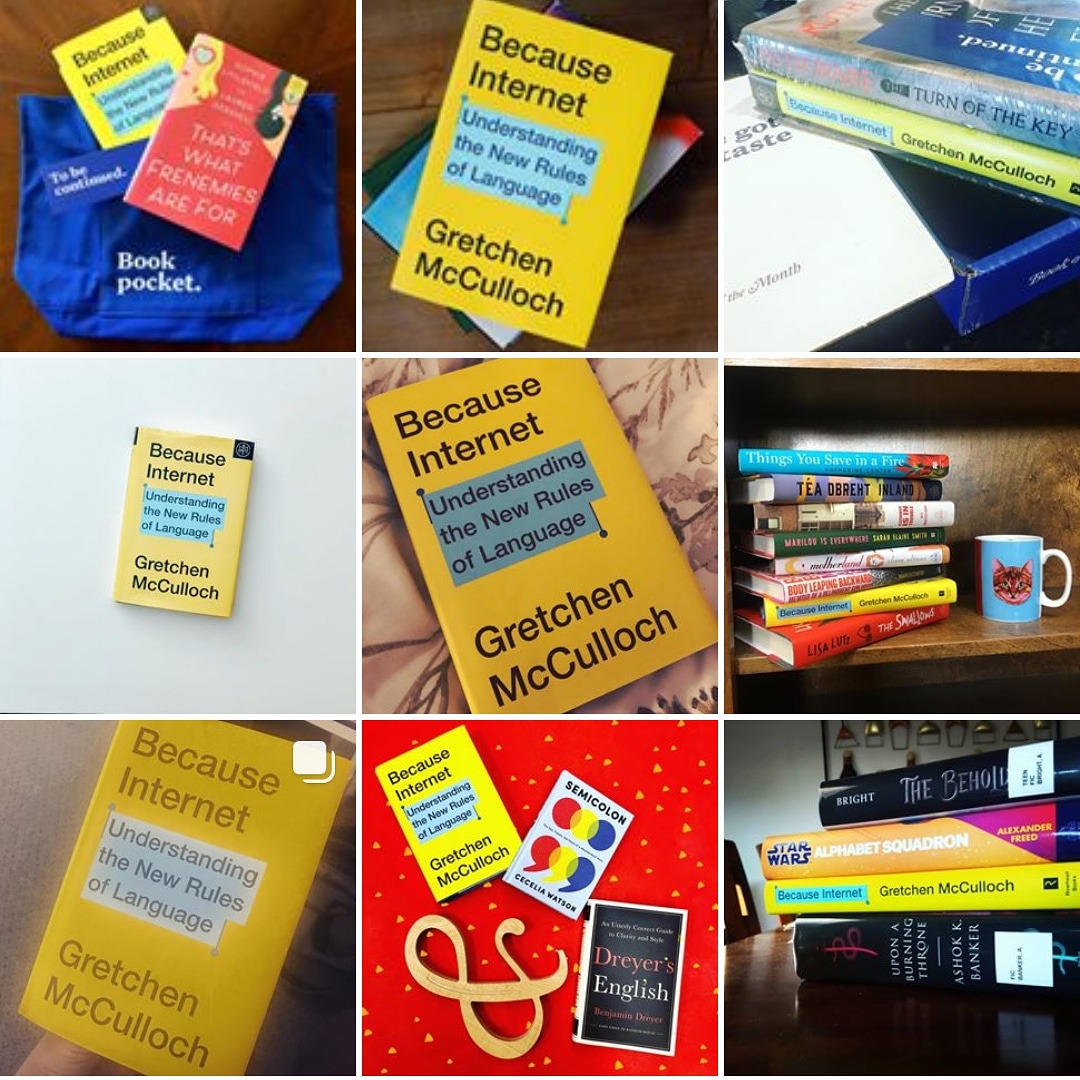 There’s going to be an official UK edition of BECAUSE INTERNET! It’ll have a slightly different cover and subtitle, and will be coming out on October 3 in the UK, Australia, New Zealand, and everywhere else that typically gets UK editions of books. You can preorder it here in hardback, ebook, and audiobook formats. (As tempting as it sounds, I will NOT be re-recording the entire audiobook in a fake British accent for the UK edition — you’ll have to settle for my actual Canadian one.)

BECAUSE INTERNET hit the New York Times bestseller list for a second week, and through mysterious alchemical forces I acquired a Wikipedia bio page and this nifty Google search box beside my name.

If you are concerned about digital tools dumbing down written English, or leaving young people with lazier syntactic habits, this is definitely not the book for you. If, on the other hand, you are interested in how language actually works (the rules are just collective agreements, constantly renegotiated), and how the internet is changing those rules, it definitely is.

I also wrote an adapted excerpt from BECAUSE INTERNET which appeared in the Wall Street Journal. Here’s a bit of it:

Irony is a linguistic trust fall. When I write or speak with a double meaning, I’m hoping that you’ll be there to catch me by understanding my tone. The risks are high—misdirected irony can gravely injure the conversation—but the rewards are high, too: the sublime joy of feeling purely understood, the comfort of knowing someone’s on your side. No wonder people through the ages kept trying so hard to write it.

Other media highlights: reviews in the Atlantic, the Wall Street Journal, and NPR Fresh Air, being quoted in a New York Times article about the em dash, and interviews on the BBC World News and NPR It’s Been a Minute. (This month’s full, ridiculous, media list below.) Here’s a quote from the Atlantic:

McCulloch shows how creative respellings, expressive punctuation, emoji, memes, and other hallmarks of informal communication online demonstrate a sophistication that can rival even the most elegant writing.

I did a Reddit AMA on the r/Books subreddit and wrote a Big Idea post on Whatever, John Scalzi’s blog, about the quixotic attempt to write a book about the internet. I’ve been reading both things for years so it was exciting to finally be on them!

I collaborated on a second Language Files video with Tom Scott and Molly Ruhl, this time about “no problem” “you’re welcome” and other phatic expressions.

I tweeted my reading of two other new books, This Is How You Lose The Time War by Amal El-Mohtar and Max Gladstone, and How To by Randall Munroe.

The main Lingthusiasm episode was about how putting sounds into syllables is like putting a burger together (a thread about how we designed this metaphor). The bonus was about metaphors themselves, including metaphors we take for granted and the career of metaphor design. We also ran a Patreon Special Offer to get signed bookplates of BECAUSE INTERNET (which is closed now, but you can still get your name and favourite IPA character on our Lingthusiasm Supporter Wall of Fame).

Here’s the ridiculously long list of all the media I did this month, another 34 items to add to July’s 68. (For those keeping score at home, that makes for 102 media things in July and August alone, which is a bit more than the amount of total media that I’d ever done in the five or so years before that. In other words, that’s a LOT.)

This month’s photo is a composite of various people’s photos of Because Internet hanging out with other books, thanks to people tagging me in their photos on instagram! It’s been really fun seeing this book I’ve been working on for so long out there in people’s lives!  (Remember to tag @gretchen.mcculloch directly in the photo rather than just in the comment if you want to show up in this view!) 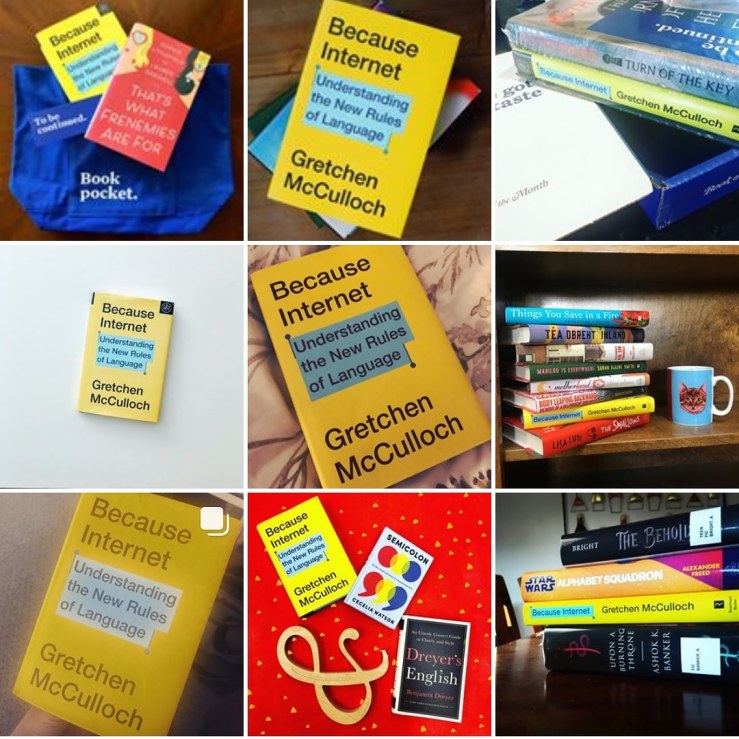 Want to follow what’s going on in the world of internet linguistics? You can now sign up for these posts as a monthly newsletter at gretchenmcc.substack.com!