I was quoted in two stories for NPR All Tech Considered: the first was an article about the linguistic style of doggo, pupper, and the rest of the dog rates/dogspotting meme and the second was about twitter threads (tweetstorms).

The audio from my SXSW Word Curation panel is now online, as is the video from the Five Minute Linguist talks that I judged in January.

This month’s Lingthusiasm episode was about how Kids These Days aren’t ruining language, plus a highly-requested bonus episode on our Patreon about how to teach yourself even more linguistics, with our recs for linguistics books, videos, and other resources. We were also featured on Language Log and Linguist List and got a great endorsement from a listener.

This month’s featured image comes from my attempt to draw a wug with an eye that would light up out of a pen that had conductive ink and using my fingers as part of the circuit, from a booth at South by Southwest in March. It was, alas, unsuccessful (they don’t teach circuits at linguist school) and I had to do weird things to the contrast in order to make the silver ink show up in the photo, but it still looks pretty cool.

I proposed a South by Southwest panel for 2017 about Word Curation: Dictionaries, Tech, and the Future with Erin McKean, Ben Zimmer, and Jane Solomon. There’s still a few days left to vote for it (you do need an account, but you can vote even if you’re not necessarily planning on attending SXSW – we’ll be putting whatever we can online afterwards).

I did interviews on #TheFeed on Sirius XM about emoji and for Wired about Apple’s new squirt gun emoji. I was also quoted in an Atlas Obscura article about singular “they” and a Jakarta Post article about internet language.

I livetweeted a linguistically interesting newish science fiction book, Too Like the Lightning by Ada Palmer, and also got into a conversation on twitter about the history of “ship” and “slash” which turned in to this article by Flourish Klink.

I contributed to a WikiEd guidebook to editing Wikipedia for linguistics students and re-started a series of linguistics jobs interviews for the blog (Do you have a linguistics background and a job, even if it seems unrelated? Want to advise some budding linguists? Here’s one way to do it!)

I finally met Nicole Cliffe, former Toast editor, in person, as well as other toasties at a meetup in Kingston!

August’s featured photo comes from a random Montreal festival that was encouraging people to draw with sidewalk chalk. I have dubbed this a wugritte.

I did a nice long interview on internet language and fandom language on the podcast Fansplaining, episode 15 ~fanspeak, which you can listen to on soundcloud or read the transcript of on tumblr. Key quote: “Your language is not my language but your language is okay.”

I was also the featured guest for a twitter #lingchat on internet language, which you can read on storify. I also storified my twitter comments about the novel The Fifth Season by N.K. Jemisin. And linguist twitter had some fun riffing on the “Champagne toasts for my real friends” chiasmic toast, also storified.

I did several interviews:

This month was a pretty quiet book-writing month, but I’ve got a lot of travel lined up for the spring, starting with South by Southwest in Austin, Texas in March where I’m giving a talk about the linguistics of emoji.

This is a picture that I took in Trident Books in Halifax a while back. They didn’t have a linguistics section, but I was struck by them having an entire label for “impermanence”. 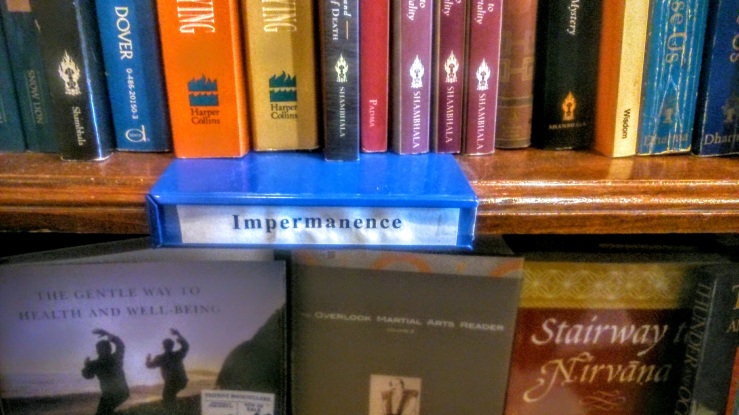