I did an interview for the New York Times about the vocabulary of covid times. Here’s a portion of it:

Looking ahead, linguistic changes are yet to come, Ms. McCulloch said. She explained the concept of a retronym — assigning a new name for a default now dated by technology or social change; for example, with the rise of cellphones, non-mobile phones became “landlines.”

“We are still in the phase of naming the new things we’re encountering, but eventually we’ll get to the stage where we need names for what things were like before the virus hit,” she said. We’re still assimilating to “the new normal” and its accompanying word bank, while longing for “the before times.”

But when we return to the life we knew, forever altered as it may be, we may need new qualifiers: first dates that aren’t over FaceTime; IRL hangouts, unmasked and less than six feet apart; to-stay drinks at bars.

I also did an interview in Archiletras, a Spanish-speaking literary publication, about Because Internet and internet language in general (it was very fun to get to read my words translated into Spanish!)

I was on an impromptu panel about linguistics in science fiction/fantasy at the online version of WisCon (#WisConline) with a fun group of linguists!

The main episode of Lingthusiasm was about schwa, the most versatile English vowel and the bonus episode was about counting systems across languages. Lingthusiasm was also featured on the big Patreon accounts as part of #MadeWithPatrons and we released new schwa-themed merch with the (admittedly aspirational these days) slogan Never Stressed.

I hit my eighth blogiversary on All Things Linguistic, and it is frankly pretty absurd that I’ve been blogging this long. Here’s the traditional year-in-review roundup post, featuring some of my favourite posts of the past year.

Two new Language Files videos came out: the Hidden Rules of Conversation (about Grice’s Maxims) and schwa, product of the ongoing collaboration between me, Tom Scott, and Molly Ruhl. (It is, uh, maybe not a coincidence that Everything Was Coming Up Schwas this month, when you have a good idea you might as well just roll with it.)

This month’s image is of the new schwa sticker pack, with art which we commissioned from Lucy Maddox of the schwa + Never Stressed slogan in multicoloured floral and black and white geometric designs. 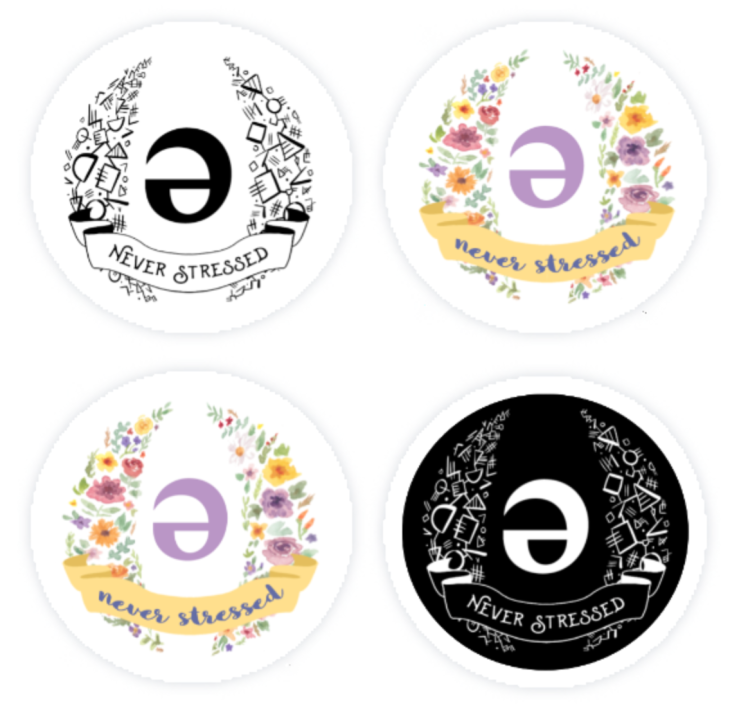